Posted on September 12, 2015 by Christine DeLorey 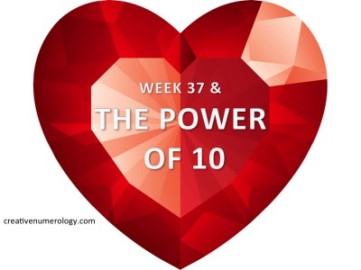 Humanity is dealing with crisis after crisis, but what exactly is a crisis? It is a dangerous situation – a critical point – where opportunity exists to either worsen or improve things. A crisis is a turning point – and the direction it takes is a matter of the attention it is given, and the CHOICES made!

10’s innovative and evolutional energy reminds us that we are now almost 6 years into the decade of the 10s. As we simultaneously transition from the 1000s to the 2000s, and from the 10s to the 20s, we are experiencing unprecedented CHANGE and UPHEAVAL. And the numbers are shining extraordinary light on what we need to know.

In the 1000s, misunderstanding of the electrical masculine 1 energy formed this dangerously imbalanced ‘man’s world’ in which ongoing war was considered the norm. But now, in the 2000s, an infusion of magnetic feminine 2 is bringing balance into the world. In the transparency of 2, we see the results of the secrecy of 1. We also see that these dire situations are unnecessary, war is not inevitable, and peace is not impossible.

After last week’s experience with 369 (week 36), week 37 has the potential to bring us to a  a new level of understanding. 10 provides the “THE NEXT STEP.”  This involves a rapid and significant broadening of consciousness. 37 takes us from the shallow to the profound.

We are evolving emotionally, and no matter where we stand or how we see things, humanity’s true feelings are coming to the surface. They cover the entire emotional spectrum, from love to hate, optimism to despair, happiness to grief, confidence to terror, peacefulness to anger and rage. And all of those feelings are perfectly natural. They all belong on the vast emotional range, in all their different levels and stages. Together, they make up the human will, and consequently, the will of the people is rising.

September’s profusion of 8 and 9 energy shows us why we must give in order to get.  37/10 makes it easier to recognize where old understandings have misled us. In order to move forward, we must release ourselves from the past and find the most effective ways to bring our true desires and interests into reality. It is therefore essential to develop compassion for ourselves – and our fellow human beings.

There are enormous problems to solve in the world and in our personal lives, and yet, every day we see proof that improvement is indeed possible. But, with nothing ‘trickling down’, the industrial system continues to collapse under the weight of it’s own greed and top-heaviness. And as the unfairness and inequality increases, the future of capitalism and the entire industrial system is on a course of colossal transformation, perhaps even collapse. But denial of reality often disables us from seeing these frightening likelihoods. 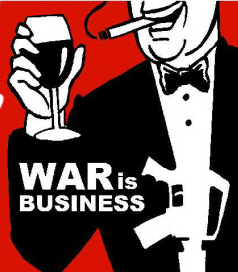 Greed, and the fight to control all of life – the capitalization of everything on Earth – is the CAUSE.

The EFFECTS are endless war, death, suffering, poverty, unthinkable cruelty to our own and other species, the biggest refugee crisis the world has ever seen, and the limiting of our greater potential for the sake of power and profit. WAR IS NEVER THE ANSWER!

But make no mistake, certain politicians and corporations, noticeably in Australia, Britain, and the USA, are using the refugee crisis to build a case for more war!

There is nothing more profitable than war. Who profits the most? 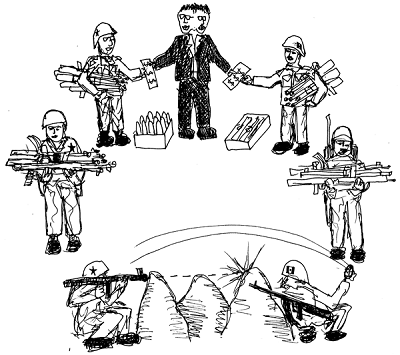 In Week 37, as the plight of the refugees became much more visible, British PM David Cameron resisted calls to help the refugees (which our wars throughout the Middle East created). At the same time, the London Arms Fair, which is one of the world’s biggest arms-related and “security” events, was attended by agents of some of the  most blatant violators of human rights, such as Thailand, Egypt, Kazakhstan, Saudi Arabia, Colombia, and Pakistan – and many others. 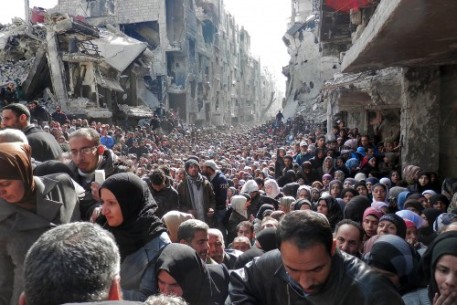 This picture shows residents waiting in line to receive food distributed in the Yarmouk refugee camp in Damascus. This is what the Syrian people are seeking refuge from. 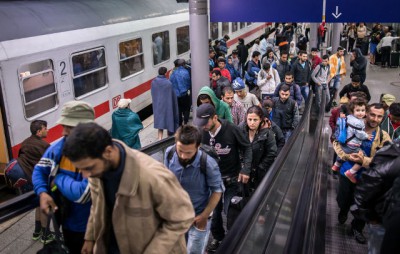 After the agony of traveling hundreds of miles to get there, refugees arrive at the train station in Dusseldorf, Germany, where they are finally welcomed.

** LATEST NEWS (Sept. 13): Germany overwhelmed by influx and will reinstate immigration control at the Austrian Border. Is the crisis reaching a new level?

But the real crisis runs much deeper than the millions of desperate souls who are fleeing their war-torn countries. The real crisis lies with humanity itself. 9 is the number of humanitarian issues – our response to which decides whether we evolve into a better way of life, or go through the whole unproductive and devastating karmic rut yet again. 9 is the number of completion – 10 takes us to a whole new level – if we choose to go there. First, our hearts must soften so that love can flow in all directions. It is also worth remembering that 2016 is going to be a 9 global year! (2+0+1+6=9) 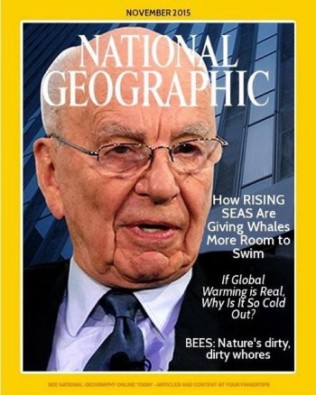 This week, the esteemed magazine, NATIONAL GEOGRAPHIC, which makes enormous financial endowments to scientists all over the world, was bought by 21st Century Fox which is owned by the climate-change denying, media-mogul, Murdoch family. This reminds us that we are indeed in the 21st century, which adds up to 3, (the number of communication, words and images, the arts, and people). 3 is the stage – the staging ground – the platform – and like any other number, it can be used for better or worse.

From August 23 to September 30th, all the week numbers begin with 3, helping us gain a deeper understanding of the power of communication, along with the methods used to “educate” (control) the population. Language is SO important right now. One little word can make all the difference between understanding and misunderstanding. For instance, we often hear about the “war for hearts and minds”. But “for” is not the right word here. The issuance of false and misleading information is a war ON hearts and minds. 8 is the number of power – and knowledge is power. But information alone is not enough. It has to be accurate information – and it has to be accurately understood.

Women’s rights are bound to suffer until the Will Of Humanity is free because feminine energy IS the Will. Misogyny is a pathological hatred of the feminine based on the belief that masculine is superior. Class-ism formed from this misunderstanding, which in turn gave birth to racism. The original belief – that male is superior to female – is the root cause of this dangerous state of imbalance in which we find ourselves – and hierarchy is what enables the incompetent and insane to hold positions of power. 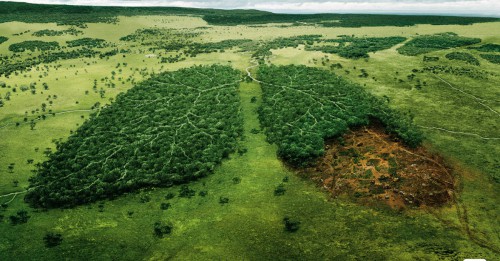 Of course, what is happening to women is a direct reflection of what we are doing to the ultimate feminine body – Mother Earth – the soul/sole provider of everything that exists on this planet. This horrific image of deforestation reminds us that the forests are the lungs of the Earth, and that ecocide is suicide!

8 is the number of success – but success has been defined for us by the class system in a way that produces varying levels of guilt and shame in those who are unable to ‘live up to’ those often impossible standards. Even those who are considered ‘successful’ are subjected to the pressure of maintaining and improving their “position”. This will change in the 2 energy as capitalism’s grip is weakened by the circumstances it has created, and the power of cooperation supersedes competition. Success is being able to live one’s life in one’s own natural way.

Our current state of emergency comes from DENIAL OF EMOTION, which is denial of reality since our feelings are our response to experience. They are our truth – our honesty. When we deny our feelings, or avoid looking at what we fear might trigger our feelings, we give our will away to those who then act – against our will – and use it to control every aspect of our lives. Just look at what is happening in the world and you will realize that denial of reality is precisely what keeps the turmoil going.

When humanity does eventually end the façade of trying to protect itself from its own feelings and let denial GO, (9 is the number of letting go), the power we will gain will be enough to ensure that the freeing of the will is obtained through confidence not fear, and love not hate.

Government does have a vital role to play in the evolution of humanity and the political landscape IS changing towards a more humanitarian approach – but there must be a different kind of government – which is dedicated to upholding conditions which enable all people to live freely and according to their true nature. This cannot happen until the very idea of government evolves beyond the limits of its “us/them”, “left/right” structure, the very nature of which is constant OPPOSITION. Free will is ever-increasing openness and spontaneity – not the same tired old talking points which never worked in the past and will certainly not work in the 2000s.

Numerologist and author of LIFE CYCLES Your Emotional Journey To Freedom And Happiness (ISBN: 0-9673130-9-0). Author of the nine-book series: CREATIVE NUMEROLOGY Your Journey Through The Cycles Of Time. My main website is: www.creativenumerology.com
View all posts by Christine DeLorey →
This entry was posted in numerology and tagged 10, arms industry, emotion, emotional healing, free will, metaphysics, numbers, numerology, PEACE, refugees, war, week 37. Bookmark the permalink.